Survey practices are critical to monitoring safety and production across mining operations. For example, 3D surveys provide quantifiable data on the efficiency of blasting operations for production reports. Understanding the form of underground structures, including any discontinuities seen in mine walls, provide indications of potential failure points.

With a long history of providing service to the mining industry, we are often asked about the types of survey tools and services that should be used in underground mining. However, in any mining production business, increased data and information continues to lead to better decision making. It is our view that the different survey technologies that we now have available compliment each other rather than compete.

Teledyne Optech’s Cavity Monitoring System (CMS) has been the tool of choice for monitoring stope-based mining for almost 30 years. Used globally, the basic principle of CMS operation involves inserting a boom-mounted rotating laser into a stope cavity post-blast to collect a 3D point-survey of the cavity (a point cloud). The system itself is designed to be robust to daily underground mining operations. This means it can withstand glancing blows from falling rocks post-blast. Furthermore, operators of the system are kept back in the drift away from the cavity’s lip. After being surveyed into the mine’s coordinate system using standard survey practices, the point cloud produced is imported directly into the CAD package or mine planning software used by the mine.

While surveying stopes in this manner may seem an ‘old’ practice, the CMS system itself has been continuously updated over this period. The latest V500 model boasts improved electronics and sensors, providing higher resolution data, faster scan times, and photographs of the cavity, simultaneously captured. See the V500 model pictured below. 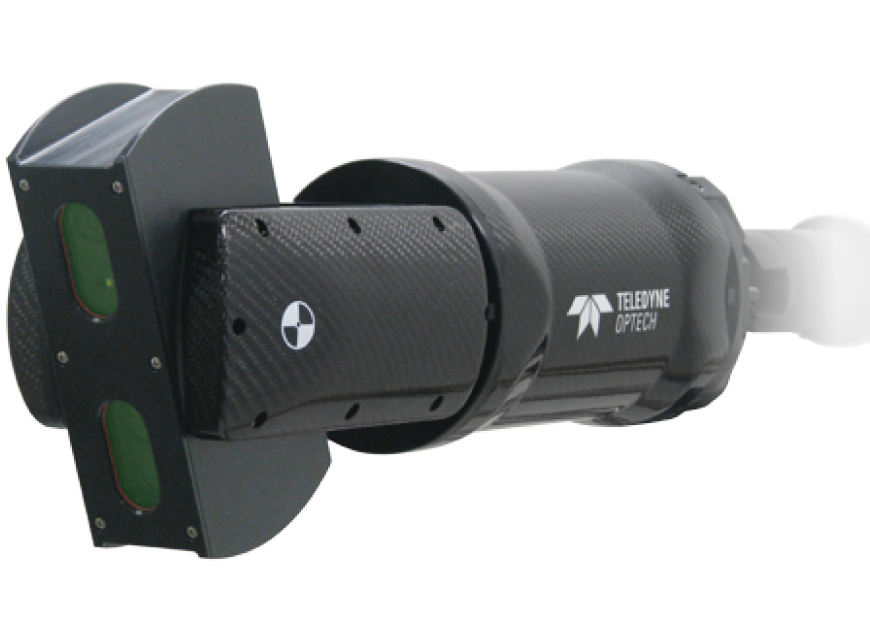 Even though system capabilities have been updated, the data produced continues to be compatible with software typically used at the mine and does not require enhancements to existing IT systems. Operation of the CMS complies with traditional surveying principles, and its workflow is well understood by mine surveyors or technicians, enabling daily production surveys to be performed by the mine’s own team without the need for costly third-party service providers.

Most importantly, the data collected by a CMS continues to meet the requirements of modern stope surveys, undertaken in a manner that keeps mine personnel away from the hazards of the stope cavity post blast.

Increased automation is now the goal of most mining operations. Unmanned Aerial Surveys (UAS) have rapidly become a means to survey structures that may have previously been inaccessible or costly. In some ways flight permissions are easier to obtain underground than above and while there are still environmental factors, such as increased possibilities of magnetic interference that should not be overlooked; advancements in system design and training of flight personnel have resulted in a safe and productive underground flight operation for a number of years now.

Surveying from an unmanned platform increases the area over which data can be collected. It also makes accessing locations in a cavity otherwise obstructed from a single viewpoint to be surveyed. The data volume collected by these systems also increases, such as the number of photographs or the ever-higher density of survey points collected by mobile laser scanning sensors.

There is even the potential to keep the operator further back from the cavity being surveyed. Keep in mind that once an unmanned aerial vehicle is in flight, most other operations in the vicinity will need to cease.

Cage-protected, “collision tolerant” UAS camera systems such as the Elios can be flown by most personnel who have had UAV flight training. These systems are ideal for visually inspecting confined spaces or overhangs, through to the structural integrity of drift walls. The capital cost of these types of systems is relatively low compared to other production technologies.

Advances in sophisticated SLAM (simultaneous location and mapping) positioning algorithms allow unmanned aerial laser scanning the opportunity to collect 3D data throughout the mine’s infrastructure. The point density from these aerial laser scanners (lidar systems) can be in orders-of-magnitude higher than from a CMS, meaning that finer discontinuities in rock structure may be interpreted.

Nevertheless, implementing ever more sophisticated technology brings operational costs and considerations. Increasingly sophisticated payloads come at a much higher capital and service cost, something to keep in mind when operating in relatively hostile mine environments. While data is collected faster, high resolution lidar data can be slower to process; with higher levels of personnel expertise and IT infrastructure to process, manage and interpret. The point density from these systems is so high that they usually cannot be easily imported into standard CAD packages or mine planning software. This means that a range of post-processing functions need to be performed, such as point cloud alignment, quality assurance, meshing and down-sampling of the data collected by the system. Due to the expertise required for these types of systems, it is still commonplace that UAS lidar systems are operated in the mines by 3rd party service providers as opposed to the mines themselves.

A summary of considerations when choosing different types of underground mine survey technologies is presented in Table 1.

There is no ‘bad’ system. Instead, all these systems are survey tools that have complementary characteristics that can help build an operational, digital picture of a mine’s infrastructure. The newest technologies bring new insights for use in the inspection of a facility. Careful thought needs to be given to get the most from investment in these technologies. For example, to what extent do budgets and operational considerations permit the involvement of specialist 3rd party operators? Do project managers and other personnel at the mine possess the skills, expertise and IT infrastructure to manage and make use of the higher resolution lidar datasets? What are the specific objectives of a survey; safety inspection, baseline design or production monitoring?

It is our view that the newer UAS survey methods can be an excellent choice when looking to build a baseline model or undertake periodic inspection of the mine’s infrastructure. For day-to-day production monitoring and reporting, the CMS still provides the most efficient manner for mine personnel to perform reporting throughout the stope’s production lifecycle.

If used for their optimal use, these technologies together can enable mining operations and infrastructure, throughout their lifecycle and for an increased range of timely decisions, to be performed out of harm’s way on the office desktop.